The Ellis Family has been heavily entrenched in the development of local sports over many decades, including Erik’s strong involvement in the promotion and development of women’s hockey in the Lindsay & District area. Playing a critical role in the pioneering and development of local women’s hockey, he has dedicated more than 20 years to the game as a coach, manager, executive board member and supporter of the Lindsay Lynx association. Women’s hockey owes its thriving existence to his dedicated service and support. He has also left his mark on the growth of the sport at the provincial level, serving executive roles within the Central East Girls Hockey League and Lower Lakes Female Hockey Association. His enthusiasm and dedication to the development of the sport are indelible. 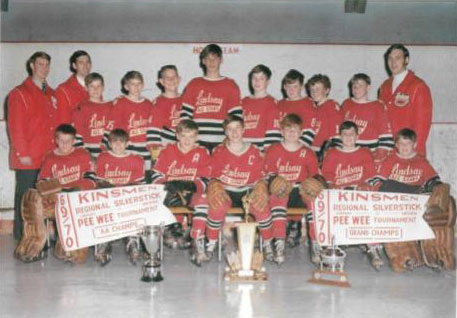 Team members were a closely-knit group of young men, and many friendships were forged and have lasted throughout the years. Much of the credit for the team’s success has always been given to the young coaching staff of Jim Golden, Ron Baldwin and Bruce Cameron. Dominating opponents throughout the season in regular league, multiple tournaments and then playoffs, the Kinsmen Peewees were nearly unstoppable. In the provincial playoffs, the squad lost only two games. The team’s success is a credit to the opportunities and support provided by the Lindsay Minor Hockey Association.

An exceptional all-round athlete, Bobcaygeon native Geoff Ingram earned the respect of his teammates and competitors at all levels throughout a very successful hockey career. Following several championships in minor hockey, including an All-Ontario title with the Bobcaygeon Cougars in 1984, Ingram enjoyed considerable success with Aurora of the Ontario Junior Hockey League, then played three years in the Ontario Hockey League with the storied Peterborough Petes club. Recipient of the Petes’ Don Marsh Award for the team’s most dedicated player, he was a valued member of the 1989 OHL championship squad. Known for playing with tenacity and determination, he continues to support athletics through valued coaching and mentoring of current young competitors.

Known as “hockey’s bad hombre,” Ken was a rugged enforcer on the ice who was known as one of the fiercest to ever lace up skates. The longtime Lindsay resident was a true trail blazer during the formulative years of the National Hockey League. The two-time Stanley Cup winner was captain of the 1918 champion Toronto Arenas and 1922 Toronto St. Pats. Enjoying a long and varied career at an evolutionary time for the sport, “The Pepper Kid” played both forward and defence and carved a well-earned reputation as a tough competitor with a rugged spirit. His professional hockey career continued into the 1930s and he went on to have a distinguished coaching career in the NHL, American Hockey League and in Nova Scotia. He also officiated as a referee in several Ontario Hockey Association seasons. The prolific scorer and rugged leader was respected by teammates and competitors alike.